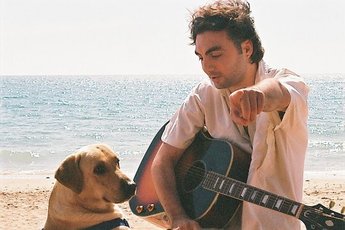 Peter Jam (Jambazian) is a Lebanese-Armenian artist, activist, singer/songwriter, from Beirut who has recently been appointed "Ambassador For Peace" by the Universal Peace Federation - the interreligious and international federation for world peace with Special Consultative status at the Economic and Social Council of the United Nations.

His passion for music and art appeared during his teenage years when he studied and experienced a wide variety of music styles from oriental/Armenian traditional and pop to blues/rock and metal specializing in guitar styles, and becoming a young music teacher.

Influenced by all these music styles, and inspired by his experiences as a peace, environmental, human/civil and animal rights activist, which include "Europe Peace Tour" (singing the peace song "If You Want" in more than 20 countries across Europe), numerous appearances in festivals and the media (TV, Radio, newspaper, magazines) between Lebanon, Armenia, Europe and USA, he initiated projects holding the messages of Love, Peace, and Unity through motivational speeches empowered by meditative, simplified philosophies and also creating a unique musical genre, which is a mix of alternative and easy listening rock with 60’s and ethnic Armenian sensation.

His project is entitled “Positive message through the power of Music, Art and Speech.”

For more information, or to hear Peter's music, please visit: